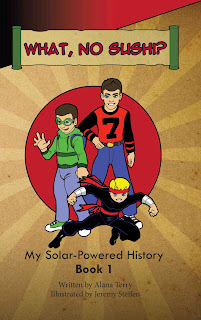 The Thursday's Children blog hop, hosted by Rhiann Wynn-Nolet gives authors a chance to talk about what inspires them. Since my first kids' book, What, No Sushi? was published this week, I'd like to tell you about the inspiration behind it.

I was in fourth grade or so when I first heard about the Japanese-American internment camps. After Pearl Harbor was bombed in WWII, Americans of Japanese ancestry were forced by government mandate to leave their homes and settle in relocation centers where their activity could be monitored.

My grandma was a beautiful girl when the internment began. My grandpa was a handsome young man and was eventually drafted into the 442nd, the Japanese-American unit that just happens to be THE most decorated of all American units coming out of World War Two.

My grandma and grandpa are heroes. But do you know what makes them heroes? It's not the fact that they were poor victims of an unfair law that forced them to leave their homes against their will. It's not the fact that my grandpa was wounded in the war and to this day still receives recognition from the US government for his acts of bravery in combat.

My grandma and grandpa are heroes because they chose to forgive. "It's just what happens during war." They are not bitter. They are not victims.

I am so proud of my legacy, and there's no way I'm leaving this earth without telling my own kids my grandparents' courageous story. And so I wrote in, in fictionalized form, in What, No Sushi? This isn't a book about my grandma and grandpa. It's a book about an entire generation of Japanese-American heroes that we should all stand up and applaud.

I can only hope that my legacy shows even a fraction of the bravery, courage, and forgiveness that my grandparents -- and their entire generation -- exemplify, and I hope that others are encouraged by their fictionalized story as recounted in What, No Sushi?

Interested in What, No Sushi? Buy your own copy today! (Use this form for US orders. International readers can purchase a copy here.)


Random Fact #8: Three years ago, I had a bout of laryngitis that lasted for six weeks - an experience I hope I never have to relive.

Email ThisBlogThis!Share to TwitterShare to FacebookShare to Pinterest
Labels: inspiration, kids books, what no sushi