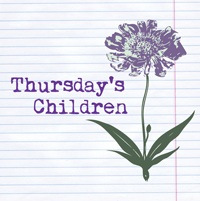 The Thursday's Children blog hop is a chance for authors to write about what inspires them. Thanks again to Rhiann Wynn-Nolet and Kristina Perez for hosting.

Imagine a dozen indie authors who all write the same genre and target (for the most part) the same style of readers. But instead of seeing themselves as competing forces in a dog-eat-dog marketplace, they decide to work together to efficiently and effectively promote each others' work.

I truly did stumble upon my friends from Mutual Street Team, a closed Facebook group of a very small number of Christian indie authors. Way back when I was getting ready to publish The Beloved Daughter, I sent out a random tweet asking for copy editor referrals. A Christian author recommended another Christian author who also does proof reading. A little later, after the edits were complete, both of these authors agreed to review my book for me on their blogs. A month or so after that, they invited me into their community of mutually-supportive Christian writers who call themselves Mutual Street Team.

As a member of Mutual Street Team, I've beta read and I've reviewed. My friends have done the same for me. I've run dozens of plot and stylistic questions past other writers I trust and admire. We've prayed for each other, sometimes right there as part of a Facebook conversation. We've managed to keep one Facebook thread going for over 105 posts, and sometimes we just pop in randomly to see how everyone else is doing.

One of the most surprising (and rewarding) aspects of this whole scenario as that we mutually promote each other's works. I haven't read all of my friend's novels yet because I'm still fairly new to the group and most of them are far more prolific than I. But we tweet and post about each others' books. We also run mutual giveaways (I'll give away three copies of your book on my blog, you give away three copies of my book on yours). I've even been known to stalk my friend's stats just to see if she gets to #1 in her genre (which she did last night, by the way).

As Christian authors who all hope to enjoy a lot of professional success, we might have set out from the beginning to out-compete and outshine one another, but instead we've chosen to do just the opposite. The funny thing is that our cooperation has created more sales for just about every one of us, as I can best guess.

In the writing world, I'm sure there will always be streaks of competition. I've been refreshing my stats page all night to see if my 99 cent sale has boosted my rank on amazon. It's nice to know that in addition to the race to bestseller status is a group of supportive friends who will share in my successes and disappointments and who will keep on encouraging me along the way.

Don't forget! My international suspense novel, The Beloved Daughter, is on sale for 99 cents this week only at amazon. Check it out!