Finish the Sentence: The Cult 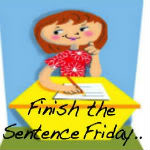 This post is part of the Finish the Sentence Friday blog hop. Today's prompt was, "In church/place of worship, I learned to..." Thanks to our hosts: Kate of Can I Get Another Bottle of Whine…, Janine of Janine’s Confessions of a Mommyaholic, Stephanie of Mommy, for Real and Dawn of Dawn's Disaster!

I went to a cult in college. Well, it wasn't really a cult. But it was. If this were Facebook, I'd just have to click the it's complicated status button.

The teaching was great, except for the fact that most of the sermons were about how we weren't supposed to rebel against God's authority (ie the pastor). If you wanted to be a super elite Christian, you had to get a discipler and basically do whatever they said. I knew a discipler who told my friend not to shop at thrift stores because the clothes might have satanic power. I know of disciplers who told the kids they mentored whom they could or couldn't date.

Eventually, I realized that the things going on in my so-called church weren't healthy and probably weren't even from God at all. I was so entrenched in that community, I ended up leaving in the middle of the night and basically fleeing to another state to get away from it all.

Yikes, you're probably thinking. My word exactly. But there's a lesson in all of this. I learned that no matter how wise we think we are, we always need to be careful about being suckered into a lie, especially when it comes to matters of faith. People hungry for control can take any number of Bible verses, twist them, and lord their power over their congregations. I'm glad I got out of that place when I did, even though I felt like a fugitive at the time (which, I guess, you could say I was). I have friends who continued on there. We've since fallen out of touch, but I think about them every now and then and wonder what's become of them.

The Bible is a powerful book. And while I genuinely believe that every word written in it is inspired by God, that doesn't mean it can't be corrupted by sinful human agents. So what did I learn from going to a cult? I learned not to trust every man or woman who can handle the Bible impressively. They just might be handling it the wrong way.

Check This Out: My Christian suspense novel, The Beloved Daughter, is set in North Korea and has won awards from Women of Faith and the Book Club Network. It's on sale for 99 cents this week only. Take a peek (and if you're a blogger interested in a giveaway opportunity, let me know)!
Posted by Alana Terry at 7:42 PM